This Jade World centers on a Thai American who has gone through a series of life changes. Ira Sukrungruang married young to an older poet. On their twelfth anniversary, he received a letter asking for a divorce, sending him into a despairing spiral. How would he define himself when he was suddenly without the person who shaped and helped mold him into the person he is? After all these years, he asked himself what he wanted and found no answer. He did not even know what wanting meant. And so, in the year between his annual visits to Thailand to see his family, he gave in to urges, both physical and emotional; found comfort in the body, many bodies; fought off the impulse to disappear, to vanish; until he arrived at some modicum of understanding. During this time, he sought to obliterate the stereotype of the sexless Asian man and began to imagine a new life with new possibilities. Through ancient temples and the lush greenery of Thailand, to the confines of a stranger's bed and a devouring couch, This Jade World chronicles a year of mishap, exploration and experimentation, self-discovery, and eventually, healing. It questions the very nature of love and heartbreak, uncovering the vulnerability of being human. 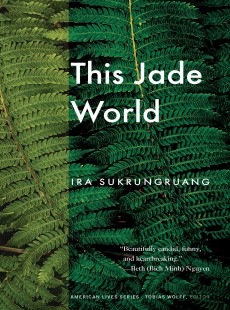