The New Deal era witnessed a surprising surge in popular engagement with the history and memory of the Civil War era. From the omnipresent book and film Gone with the Wind and the scores of popular theater productions to Aaron Copeland's "A Lincoln Portrait," it was hard to miss America's fascination with the war in the 1930s and 1940s. Nina Silber deftly examines the often conflicting and politically contentious ways in which Americans remembered the Civil War era during the years of the Depression, the New Deal, and World War II. In doing so, she reveals how the debates and events of that earlier period resonated so profoundly with New Deal rhetoric about state power, emerging civil rights activism, labor organizing and trade unionism, and popular culture in wartime.

At the heart of this book is an examination of how historical memory offers people a means of understanding and defining themselves in the present. Silber reveals how, during a moment of enormous national turmoil, the events and personages of the Civil War provided a framework for reassessing national identity, class conflict, and racial and ethnic division. The New Deal era may have been the first time Civil War memory loomed so large for the nation as a whole, but, as the present moment suggests, it was hardly the last. 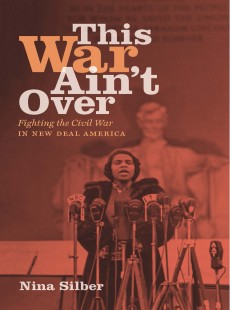 This War Ain't Over