Thomas Day (1801-61), a free man of color from Milton, North Carolina, became the most successful cabinetmaker in North Carolina--white or black--during a time when most blacks were enslaved and free blacks were restricted in their movements and activities. His surviving furniture and architectural woodwork still represent the best of nineteenth-century craftsmanship and aesthetics.

In this lavishly illustrated book, Patricia Phillips Marshall and Jo Ramsay Leimenstoll show how Day plotted a carefully charted course for success in antebellum southern society. Beginning in the 1820s, he produced fine furniture for leading white citizens and in the 1840s and '50s diversified his offerings to produce newel posts, stair brackets, and distinctive mantels for many of the same clients. As demand for his services increased, the technological improvements Day incorporated into his shop contributed to the complexity of his designs.

Day's style, characterized by undulating shapes, fluid lines, and spiraling forms, melded his own unique motifs with popular design forms, resulting in a distinctive interpretation readily identified to his shop. The photographs in the book document furniture in public and private collections and architectural woodwork from private homes not previously associated with Day. The book provides information on more than 160 pieces of furniture and architectural woodwork that Day produced for 80 structures between 1835 and 1861.

Through in-depth analysis and generous illustrations, including over 240 photographs (20 in full color) and architectural photography by Tim Buchman, Marshall and Leimenstoll provide a comprehensive perspective on and a new understanding of the powerful sense of aesthetics and design that mark Day's legacy. 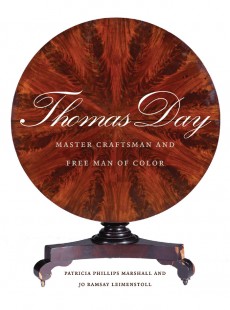