Sherman's March, cutting a path through Georgia and the Carolinas, is among the most symbolically potent events of the Civil War. In Through the Heart of Dixie, Anne Sarah Rubin uncovers and unpacks stories and myths about the March from a wide variety of sources, including African Americans, women, Union soldiers, Confederates, and even Sherman himself. Drawing her evidence from an array of media, including travel accounts, memoirs, literature, films, and newspapers, Rubin uses the competing and contradictory stories as a lens into the ways that American thinking about the Civil War has changed over time.

Compiling and analyzing the discordant stories around the March, and considering significant cultural artifacts such as George Barnard's 1866 Photographic Views of Sherman's Campaign, Margaret Mitchell's Gone with the Wind, and E. L. Doctorow's The March, Rubin creates a cohesive narrative that unites seemingly incompatible myths and asserts the metaphorical importance of Sherman's March to Americans' memory of the Civil War. The book is enhanced by a digital history project, which can be found at shermansmarch.org. 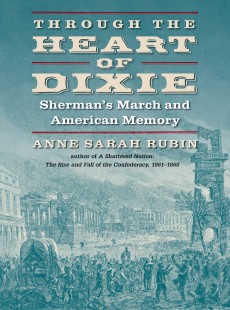 Through the Heart of Dixie