In February 1862, General Ambrose E. Burnside led Union forces to victory at the Battle of Roanoke Island. As word spread that the Union army had established a foothold in eastern North Carolina, slaves from the surrounding area streamed across Federal lines seeking freedom. By early 1863, nearly 1,000 refugees had gathered on Roanoke Island, working together to create a thriving community that included a school and several churches. As the settlement expanded, the Reverend Horace James, an army chaplain from Massachusetts, was appointed to oversee the establishment of a freedmen's colony there. James and his missionary assistants sought to instill evangelical fervor and northern republican values in the colonists, who numbered nearly 3,500 by 1865, through a plan that included education, small-scale land ownership, and a system of wage labor.

Time Full of Trial tells the story of the Roanoke Island freedmen's colony from its contraband-camp beginnings to the conflict over land ownership that led to its demise in 1867. Drawing on a wealth of primary sources, Patricia Click traces the struggles and successes of this long-overlooked yet significant attempt at building what the Reverend James hoped would be the model for "a new social order" in the postwar South. 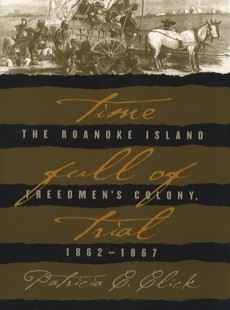