Most Americans familiar with General John J. "Black Jack" Pershing know him as the commander of American Expeditionary Forces in Europe during the latter days of World War I. But Pershing was in his late fifties by then. Pershing's military career began in 1886, with his graduation from West Point and his first assignments in the American West as a horsebound cavalry officer during the final days of Apache resistance in the Southwest, where Arizona and New Mexico still represented a frontier of blue-clad soldiers, Native Americans, cowboys, rustlers, and miners. But the Southwest was just the beginning of Pershing's West. He would see assignments over the years in the Dakotas, during the Ghost Dance uprising and the battle of Wounded Knee; a posting at Montana's Fort Assiniboine; and, following his years in Asia, a return to the West with a posting at the Presidio in San Francisco and a prolonged assignment on the Mexican-American border in El Paso, which led to his command of the Punitive Expedition, tasked with riding deep into Northern Mexico to capture the pistolero Pancho Villa. During those thirty years from West Point to the Western Front, Pershing had a colorful and varied military career, including action during the Spanish-American War and lengthy service in the Philippines. Both were new versions of the American frontier abroad, even as the frontier days of the American West were closing. All of Pershing's experiences in the American West prepared him for his ultimate assignment as the top American commander during the Great War. If the American frontier and, more broadly, the American West provided a cauldron in which Americans tested themselves during the nineteenth century, they did the same for John Pershing. His story was a historical Western. 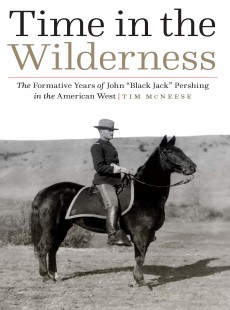 Time in the Wilderness

The Formative Years of John ?Black Jack? Pershing in the American West