Offering an interpretation of the Revolutionary period that places women at the center, Joan R. Gundersen provides a synthesis of the scholarship on women's experiences during the era as well as a nuanced understanding that moves beyond a view of the war as either a "golden age" or a disaster for women. Gundersen argues that women's lives varied greatly depending on race and class, but all women had to work within shifting parameters that enabled opportunities for some while constraining opportunities for others.

Three generations of women in three households personalize these changes: Elizabeth Dutoy Porter, member of the small-planter class whose Virginia household included an African American enslaved woman named Peg; Deborah Franklin, common-law wife of the prosperous revolutionary, Benjamin; and Margaret Brant, matriarch of a prominent Mohawk family who sided with the British during the war. This edition incorporates substantial revisions in the text and the notes to take into account the scholarship that has appeared since the book's original publication in 1996. 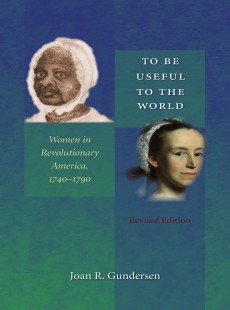 To Be Useful to the World