To Come to a Better Understanding analyzes the cultural encounters of the medicine men and clergy meetings held on Rosebud Reservation in St. Francis, South Dakota, from 1973 through 1978. Organized by Father Stolzman, a Catholic priest studying Lakota religious practice, the meetings fit the goal of the recently formed Medicine Men's Association to share its members' knowledge about Lakota thought and ritual. Both groups stated that the purpose of the historic theological discussions was "to come to a better understanding." Though the groups ended their formal discussions after eighty-four meetings, Sandra L. Garner shows how this cultural exchange reflects a rich Native intellectual tradition and articulates the multiple meanings of "understanding" that necessarily characterize intercultural encounters.

Garner examines the exchanges of these two very different cultures, which share a history of inequitable power relationships, to explore questions of cultural ownership and activism. These meetings were another form of activism, a "quiet side" without the militancy of the American Indian Movement. Based on ethnographic fieldwork and archival analysis, this volume focuses on the medicine men participants—who served as translators, interpreters, and cultural mediators—to explore how modern political, social, and religious issues were negotiated from an indigenous perspective that valued experience as critical to understanding. 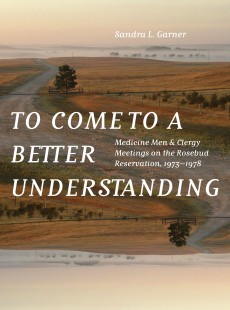 To Come to a Better Understanding

Medicine Men and Clergy Meetings on the Rosebud Reservation, 1973–1978