This book is a carefully argued study of peasants and labor during the Somoza regime, focusing on popular movements in the economically strategic department of Chinandega in western Nicaragua. Jeffrey Gould traces the evolution of group consciousness among peasants and workers as they moved away from extreme dependency on the patron to achieve an autonomous social and political ideology. In doing so, he makes important contributions to peasant studies and theories of revolution, as well as our understanding of Nicaraguan history.

According to Gould, when Anastasio Somoza first came to power in 1936, workers and peasants took the Somocista reform program seriously. Their initial acceptance of Somocismo and its early promises of labor rights and later ones of land redistribution accounts for one of the most peculiar features of the pre-Sandinista political landscape: the wide gulf separating popular movements and middle-class opposition to the government. Only the alliance of the Frente Sandinista (FSLN) and the peasant movement would knock down the wall of silence between the two forces. 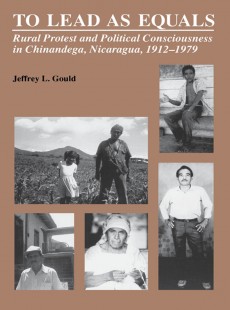 To Lead As Equals