In this cultural history of the origins of the Cold War, John Fousek argues boldly that American nationalism provided the ideological glue for the broad public consensus that supported U.S. foreign policy in the Cold War era. From the late 1940s through the late 1980s, the United States waged cold war against the Soviet Union not primarily in the name of capitalism or Western civilization--neither of which would have united the American people behind the cause--but in the name of America.

Through close readings of sources that range from presidential speeches and popular magazines to labor union debates and the African American press, Fousek shows how traditional nationalist ideas about national greatness, providential mission, and manifest destiny influenced postwar public culture and shaped U.S. foreign policy discourse during the crucial period from the end of World War II to the beginning of the Korean War. Ultimately, he says, in the atmosphere created by apparently unceasing international crises, Americans rallied around the flag, eventually coming to equate national loyalty with global anticommunism and an interventionist foreign policy. 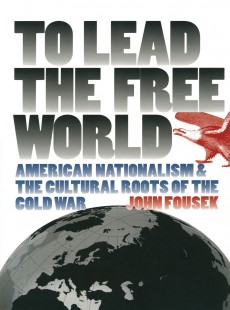 To Lead the Free World

American Nationalism and the Cultural Roots of the Cold War