Before there was Joe DiMaggio, there was Tony Lazzeri. A decade before the "Yankee Clipper" began his legendary career in 1936, Lazzeri paved the way for the man who would become the patron saint of Italian American fans and players. He did so by forging his own Hall of Fame career as a key member of the Yankees' legendary Murderers' Row lineup between 1926 and 1937, in the process becoming the first major baseball star of Italian descent. An unwitting pioneer who played his entire career while afflicted with epilepsy, Lazzeri was the first player to hit sixty home runs in organized baseball, one of the first middle infielders in the big leagues to hit with power, and the first Italian player with enough star power to attract a whole new generation of fans to the ballpark. As a twenty-two-year-old rookie for the New York Yankees, Lazzeri played alongside such legends as Babe Ruth and Lou Gehrig. He immediately emerged as a star, finishing second to Ruth in RBIs and third in home runs in the American League. In his twelve years as the second baseman for Yankee teams that won five World Series, he was their third-most productive hitter, driving in more runs than all but five American Leaguers, and hitting more home runs than all but six. Yet for all that, today he is a largely forgotten figure, his legacy diminished by the passage of time and tarnished by his bases-loaded strikeout to Grover Cleveland Alexander in Game Seven of the 1926 World Series, a strikeout immortalized on Alexander's Hall of Fame plaque. Tony Lazzeri reveals that quite to the contrary, he was one of the smartest, most talented, and most respected players of his time, the forgotten Yankee who helped the team win six American League pennants and five World Series titles. 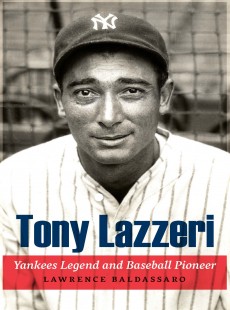