In 1980, with the passage of the Comprehensive Environmental Response, Compensation, and Liability Act, Congress created the Superfund as a mechanism to clean up the toxic legacy of the industrial and chemical revolutions. Over a decade later, the consensus is that the program has failed: too much has been spent and too little accomplished. Harold Barnett unravels the history of this failure, examining the economic and political factors that contributed to it and suggesting policy changes necessary to create a viable cleanup program. Barnett argues that the Superfund has failed because of conflict over who will pay the toxic debt and the impact of this conflict on interdependent funding and enforcement decisions at state, regional, and national levels. He argues that the inability of legislators and regulatory agencies to take effective and timely action is related to the economic and political power of major corporate polluters. Spanning the Reagan and Bush administrations, the book highlights the ongoing conflict between deregulatory policies and environmental programs. 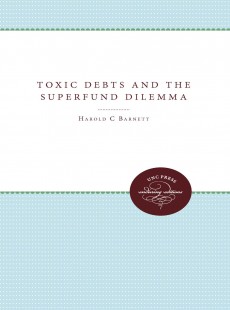 Toxic Debts and the Superfund Dilemma