In this innovative new study, Zach Sell returns to the explosive era of capitalist crisis, upheaval, and warfare between emancipation in the British Empire and Black emancipation in the United States. In this age of global capital, U.S. slavery exploded to a vastness hitherto unseen, propelled forward by the outrush of slavery-produced commodities to Britain, continental Europe, and beyond. As slavery-produced commodities poured out of the United States, U.S. slaveholders transformed their profits into slavery expansion. Ranging from colonial India to Australia and Belize, Sell's examination further reveals how U.S. slavery provided not only the raw material for Britain's explosive manufacturing growth but also inspired new hallucinatory imperial visions of colonial domination that took root on a global scale. What emerges is a tale of a system too powerful and too profitable to end, even after emancipation; it is the story of how slavery's influence survived emancipation, infusing empire and capitalism to this day. 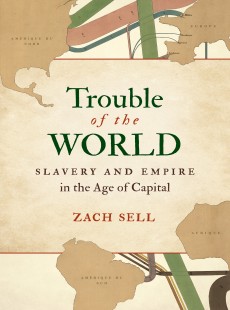 Trouble of the World

Slavery and Empire in the Age of Capital