Ideologically divided and disorganized in 1960, the conservative wing of the Republican Party appeared to many to be virtually obsolete. However, over the course of that decade, the Right reinvented itself and gained control of the party. In Turning Right in the Sixties, Mary Brennan describes how conservative Americans from a variety of backgrounds, feeling disfranchised and ignored, joined forces to make their voices heard and by 1968 had gained enough power within the party to play the decisive role in determining the presidential nominee.

Building on Barry Goldwater's short-lived bid for the presidential nomination in 1960, Republican conservatives forged new coalitions, began to organize at the grassroots level, and gained enough support to guarantee Goldwater the nomination in 1964. Brennan argues that Goldwater's loss to Lyndon Johnson in the general election has obscured the more significant fact that conservatives had wrested control of the Republican Party from the moderates who had dominated it for years. The lessons conservatives learned in that campaign, she says, aided them in 1968 and laid the groundwork for Ronald Reagan's presidential victory in 1980. 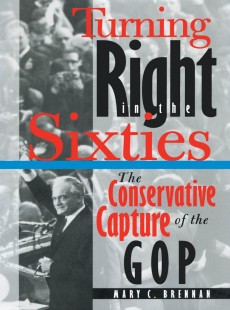 Turning Right in the Sixties

The Conservative Capture of the GOP