This book describes the turbulent transformation of South Carolina from a colony rent by sectional conflict into a state dominated by the South's most unified and politically powerful planter leadership. Rachel Klein unravels the sources of conflict and growing unity, showing how a deep commitment to slavery enabled leaders from both low- and backcountry to define the terms of political and ideological compromise.

The spread of cotton into the backcountry, often invoked as the reason for South Carolina's political unification, actually concluded a complex struggle for power and legitimacy. Beginning with the Regulator Uprising of the 1760s, Klein demonstrates how backcountry leaders both gained authority among yeoman constituents and assumed a powerful role within state government. By defining slavery as the natural extension of familial inequality, backcountry ministers strengthened the planter class. At the same time, evangelical religion, like the backcountry's dominant political language, expressed yet contained the persisting tensions between planters and yeomen. 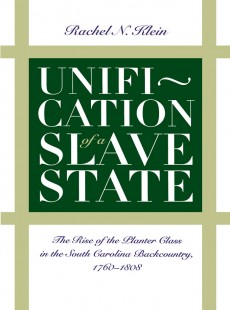 Unification of a Slave State

The Rise of the Planter Class in the South Carolina Backcountry, 1760-1808