Historians have given a great deal of attention to the lives and experiences of Civil War soldiers, but surprisingly little is known about navy sailors who participated in the conflict. Michael J. Bennett remedies the longstanding neglect of Civil War seamen in this comprehensive assessment of the experience of common Union sailors from 1861 to 1865.

To resurrect the voices of the "Union Jacks," Bennett combed sailors' diaries, letters, and journals. He finds that the sailors differed from their counterparts in the army in many ways. They tended to be a rougher bunch of men than the regular soldiers, drinking and fighting excessively. Those who were not foreign-born, escaped slaves, or unemployed at the time they enlisted often hailed from the urban working class rather than from rural farms and towns. In addition, most sailors enlisted for pragmatic rather than ideological reasons.

Bennett's examination provides a look into the everyday lives of sailors and illuminates where they came from, why they enlisted, and how their origins shaped their service. By showing how these Union sailors lived and fought on the sea, Bennett brings an important new perspective to our understanding of the Civil War. 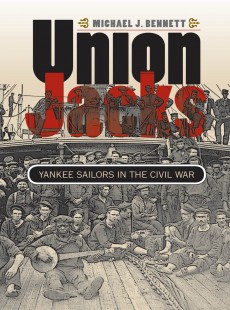 Yankee Sailors in the Civil War