Charles Redd Center Phi Alpha Theta Book Award for the Best Book on the American West 2018 Francis Armstrong Madsen Best Book Award from the Utah State Historical Society 2018 Best First Book Award from the Mormon History Association Newly created territories in antebellum America were designed to be extensions of national sovereignty and jurisdiction. Utah Territory, however, was a deeply contested space in which a cohesive settler group—the Mormons—sought to establish their own "popular sovereignty," raising the question of who possessed and could exercise governing, legal, social, and even cultural power in a newly acquired territory.   In Unpopular Sovereignty, Brent M. Rogers invokes the case of popular sovereignty in Utah as an important contrast to the better-known slavery question in Kansas. Rogers examines the complex relationship between sovereignty and territory along three main lines of inquiry: the implementation of a republican form of government, the administration of Indian policy and Native American affairs, and gender and familial relations—all of which played an important role in the national perception of the Mormons' ability to self-govern. Utah's status as a federal territory drew it into larger conversations about popular sovereignty and the expansion of federal power in the West. Ultimately, Rogers argues, managing sovereignty in Utah proved to have explosive and far-reaching consequences for the nation as a whole as it teetered on the brink of disunion and civil war. 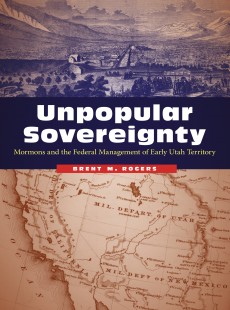 Mormons and the Federal Management of Early Utah Territory