In the 1910s, both W. E. B. Du Bois and Booker T. Washington praised the black community in Durham, North Carolina, for its exceptional race progress. Migration, urbanization, and industrialization had turned black Durham from a post-Civil War liberation community into the "capital of the black middle class." African Americans owned and operated mills, factories, churches, schools, and an array of retail services, shops, community organizations, and race institutions. Using interviews, narratives, and family stories, Leslie Brown animates the history of this remarkable city from emancipation to the civil rights era, as freedpeople and their descendants struggled among themselves and with whites to give meaning to black freedom.

Brown paints Durham in the Jim Crow era as a place of dynamic change where despite common aspirations, gender and class conflicts emerged. Placing African American women at the center of the story, Brown describes how black Durham's multiple constituencies experienced a range of social conditions. Shifting the historical perspective away from seeing solidarity as essential to effective struggle or viewing dissent as a measure of weakness, Brown demonstrates that friction among African Americans generated rather than depleted energy, sparking many activist initiatives on behalf of the black community. 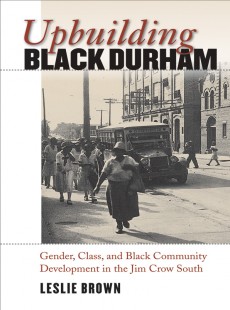