One grouchy husband. Three reluctant kids. Five hundred miles of wilderness. And one woman, determined to escape the humdrum existence of modern parenting and a toxic work environment and to confront the history of environmental damage wreaked by westward expansion and the Anthropocene. In Uphill Both Ways Andrea Lani walks us through the Southern Rockies, describing how the region has changed since the discovery of gold in 1859. At the same time, she delves into the history of her family, who immigrated to Leadville to work in the mines, and her own story of hiking the trail in her early twenties before returning two decades later, a depressed middle-aged mom in East Coast exile seeking happiness in a childhood landscape. On the 489-mile trek from Denver to Durango on the Colorado Trail, Lani's family traveled through stunning scenery and encountered wildflowers, wildlife, and too many other hikers. They ate cold oatmeal in a chilly, wet tent and experienced scorching heat, torrential thunderstorms, and the first nip of winter. Her kids grew in unimaginable ways, and they became known as "the family of five," an oddity along a trail populated primarily by solo men. As they inched along the trail, Lani began to exercise disused smile muscles, despite the challenges of hiking in a middle-aged body, maintaining her children's safety and happiness, and contending with marital discord. She learned that being a slow hiker does not make one a bad hiker and began to uncover the secret to happiness. 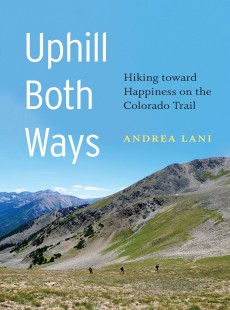 Hiking toward Happiness on the Colorado Trail