Amidst the violent racism prevalent at the turn of the twentieth century, African American cultural elites, struggling to articulate a positive black identity, developed a middle-class ideology of racial uplift. Insisting that they were truly representative of the race's potential, black elites espoused an ethos of self-help and service to the black masses and distinguished themselves from the black majority as agents of civilization; hence the phrase 'uplifting the race.'

Drawing on the work of W. E. B. Du Bois, Anna Julia Cooper, Alice Dunbar-Nelson, Hubert H. Harrison, and others, Gaines focuses on the intersections between race and gender in both racial uplift ideology and black nationalist thought, showing that the meaning of uplift was intensely contested even among those who shared its aims. Ultimately, elite conceptions of the ideology retreated from more democratic visions of uplift as social advancement, leaving a legacy that narrows our conceptions of rights, citizenship, and social justice. 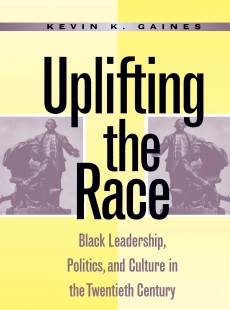 Black Leadership, Politics, and Culture in the Twentieth Century