For Native Americans, religious freedom has been an elusive goal. From nineteenth-century bans on indigenous ceremonial practices to twenty-first-century legal battles over sacred lands, peyote use, and hunting practices, the U.S. government has often acted as if Indian traditions were somehow not truly religious and therefore not eligible for the constitutional protections of the First Amendment. In this book, Tisa Wenger shows that cultural notions about what constitutes "religion" are crucial to public debates over religious freedom.

In the 1920s, Pueblo Indian leaders in New Mexico and a sympathetic coalition of non-Indian reformers successfully challenged government and missionary attempts to suppress Indian dances by convincing a skeptical public that these ceremonies counted as religion. This struggle for religious freedom forced the Pueblos to employ Euro-American notions of religion, a conceptual shift with complex consequences within Pueblo life. Long after the dance controversy, Wenger demonstrates, dominant concepts of religion and religious freedom have continued to marginalize indigenous traditions within the United States. 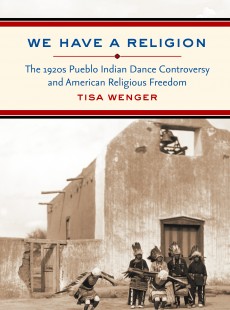 We Have a Religion