The rise in standards of living throughout the U. S. in the wake of World War II brought significant changes to the lives of southern textile workers. Mill workers' wages rose, their purchasing power grew, and their economic expectations increased--with little help from the unions. Timothy Minchin argues that the reasons behind the failure of textile unions in the postwar South lie not in stereotypical assumptions of mill workers' passivity or anti-union hostility but in these large-scale social changes. Minchin addresses the challenges faced by the TWUA--competition from nonunion mills that matched or exceeded union wages, charges of racism and radicalism within the union, and conflict between its northern and southern branches--and focuses especially on the devastating general strike of 1951. Drawing extensively on oral histories and archival records, he presents a close look at southern textile communities within the context of the larger history of southern labor, linking events in the textile industry to the broader social and economic impact of World War II on American society. 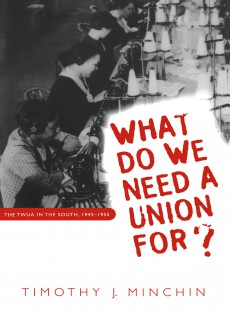 What Do We Need a Union For?