The story of Jackie Robinson valiantly breaking baseball’s color barrier in 1947 is one that most Americans know. But less recognized is the fact that some seventy years earlier, following the Civil War, baseball was tenuously biracial and had the potential for a truly open game. How, then, did the game become so firmly segregated that it required a trailblazer like Robinson? The answer, Ryan A. Swanson suggests, has everything to do with the politics of “reconciliation” and a wish to avoid the issues of race that an integrated game necessarily raised.   The history of baseball during Reconstruction, as Swanson tells it, is a story of lost opportunities. Thomas Fitzgerald and Octavius Catto (a Philadelphia baseball tandem), for example, were poised to emerge as pioneers of integration in the 1860s. Instead, the desire to create a “national game”—professional and appealing to white Northerners and Southerners alike—trumped any movement toward civil rights. Focusing on Philadelphia, Washington DC, and Richmond—three cities with large African American populations and thriving baseball clubs—Swanson uncovers the origins of baseball’s segregation and the mechanics of its implementation. An important piece of sports history, his work also offers a better understanding of Reconstruction, race, and segregation in America. 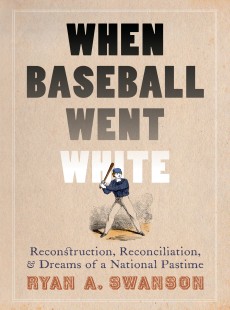 Reconstruction, Reconciliation, and Dreams of a National Pastime