When Sunflowers Bloomed Red reveals the origins of agrarian radicalism in the late nineteenth-century United States. Great Plains radicals, particularly in Kansas, influenced the ideological principles of the Populist movement, the U.S. labor movement, American socialism, American syndicalism, and American communism into the mid-twentieth century. Known as the American Radical Tradition, members of the Greenback Labor Party and the Knights of Labor joined with Prohibitionists, agrarian Democrats, and progressive Republicans to form the Great Plains Populist Party (later the People's Party) in the 1890s. The Populists called for the expansion of the money supply through the free coinage of silver, federal ownership of the means of communication and transportation, the elimination of private banks, universal suffrage, and the direct election of U.S. senators. They also were the first political party to advocate for familiar features of modern life, such as the eight-hour workday for agrarian and industrial laborers, a graduated income tax system, and a federal reserve system to manage the nation's money supply. When the People's Party lost the hotly contested election of 1896, members of the party dissolved into socialist and other left-wing parties and often joined efforts with the national Progressive movement.When Sunflowers Bloomed Red offers readers entry into the Kansas radical tradition and shows how the Great Plains agrarian movement influenced and transformed politics and culture in the twentieth century and beyond. 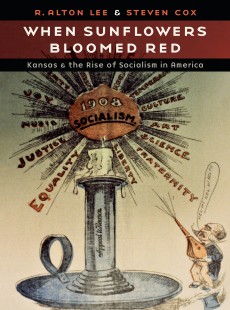 Kansas and the Rise of Socialism in America