From headlines to documentaries, urban schools are at the center of current debates about education. From these accounts, one would never know that 51 million Americans live in rural communities and depend on their public schools to meet not only educational but also social and economic needs. For many communities, these schools are the ties that bind. Why Rural Schools Matter shares the untold story of rural education. Drawing upon extensive research in two southern towns, Mara Tieken exposes the complicated ways in which schools shape the racial dynamics of their towns and sustain the communities that surround them. The growing power of the state, however, brings the threat of rural school closure, which jeopardizes the education of children and the future of communities. With a nuanced understanding of the complicated relationship between communities and schools, Tieken warns us that current education policies--which narrow schools' purpose to academic achievement alone--endanger rural America and undermine the potential of a school, whether rural or urban, to sustain a community. Vividly demonstrating the effects of constricted definitions of public education in an era of economic turmoil and widening inequality, Tieken calls for a more contextual approach to education policymaking, involving both state and community. 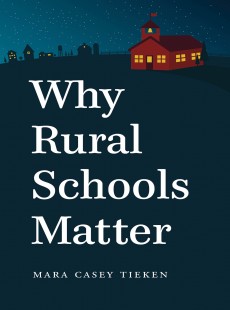