The first woman judge in the state of North Carolina and the first woman in the United States to be elected chief justice of a state supreme court, Susie Marshall Sharp (1907-1996) broke new ground for women in the legal profession. When she retired in 1979, she left a legacy burnished by her tireless pursuit of lucidity in the law, honesty in judges, and humane conditions in prisons.

Anna Hayes presents Sharp's career as an attorney, distinguished judge, and politician within the context of the social mores, the legal profession, and the political battles of her day, illuminated by a careful and revealing examination of Sharp's family background, private life, and personality. Judge Sharp was viewed by contemporaries as the quintessential spinster, who had sacrificed marriage and family life for a successful career. The letters and journals she wrote throughout her life, however, reveal that Sharp led a rich private life in which her love affairs occupied a major place, unsuspected by the public or even her closest friends and family.

With unrestricted access to Sharp's abundant journals, papers, and notes, Anna Hayes uncovers the story of a brilliant woman who transcended the limits of her times, who opened the way for women who followed her, and who improved the quality of justice for the citizens of her state. Without Precedent also tells the story of a complicated woman, at once deeply conservative and startlingly modern, whose intriguing self-contradictions reflect the complexity of human nature. 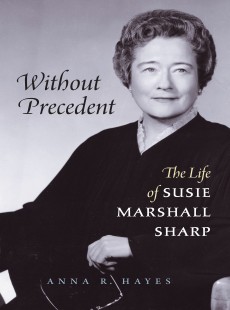 The Life of Susie Marshall Sharp