In Women and the Historical Enterprise in America, Julie Des Jardins explores American women's participation in the practice of history from the late nineteenth century through the end of World War II, a period in which history became professionalized as an increasingly masculine field of scientific inquiry. Des Jardins shows how women nevertheless transformed the profession during these years in their roles as writers, preservationists, educators, archivists, government workers, and social activists.

Des Jardins explores the work of a wide variety of women historians, both professional and amateur, popular and scholarly, conservative and radical, white and nonwhite. Although their ability to earn professional credentials and gain research access to official documents was limited by their gender (and often by their race), these historians addressed important new questions and represented social groups traditionally omitted from the historical record, such as workers, African Americans, Native Americans, and religious minorities. Assessing the historical contributions of Mary Beard, Zora Neale Hurston, Angie Debo, Mari Sandoz, Lucy Salmon, Mary McLeod Bethune, Dorothy Porter, Nellie Neilson, and many others, Des Jardins argues that women working within the broadest confines of the historical enterprise collectively brought the new perspectives of social and cultural history to the study of a multifaceted American past. In the process, they not only developed the field of women's history but also influenced the creation of our national memory in the twentieth century. 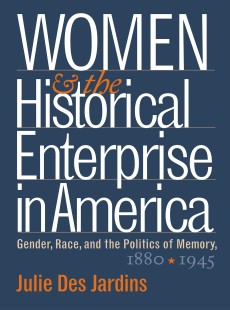 Women and the Historical Enterprise in America: Gender, Race and the Politics of Memory