There are few moments in history when the division between the sexes seems as "natural" as during wartime: men go off to the "war front," while women stay behind on the "home front." But the very notion of the home front was an invention of the First World War, when, for the first time, "home" and "domestic" became adjectives that modified the military term "front." Such an innovation acknowledged the significant and presumably new contributions of civilians, especially women, to the war effort.

Yet, as Susan Grayzel argues, throughout the war, traditional notions of masculinity and femininity survived, primarily through the maintenance of--and indeed reemphasis on--soldiering and mothering as the core of gender and national identities. Drawing on sources that range from popular fiction and war memorials to newspapers and legislative debates, Grayzel analyzes the effects of World War I on ideas about civic participation, national service, morality, sexuality, and identity in wartime Britain and France. Despite the appearance of enormous challenges to gender roles due to the upheavals of war, the forces of stability prevailed, she says, demonstrating the Western European gender system's remarkable resilience. 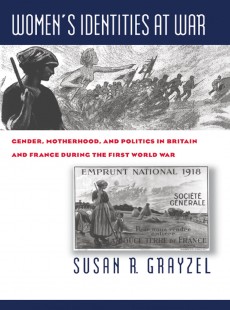 Gender, Motherhood, and Politics in Britain and France during the First World War