From Storyville brothels and narratives of turn-of-the-century New Orleans to plantation tours, Bette Davis films, Elvis memorials, Willa Cather's fiction, and the annual prison rodeo held at the Louisiana State Penitentiary at Angola, Jessica Adams considers spatial and ideological evolutions of southern plantations after slavery. In Wounds of Returning, Adams shows that the slave past returns to inhabit plantation landscapes that have been radically transformed by tourism, consumer culture, and modern modes of punishment--even those landscapes from which slavery has supposedly been banished completely.

Adams explores how the commodification of black bodies during slavery did not disappear with abolition--rather, the same principle was transformed into modern consumer capitalism. As Adams demonstrates, however, counternarratives and unexpected cultural hybrids erupt out of attempts to re-create the plantation as an uncomplicated scene of racial relationships or a signifier of national unity. Peeling back the layers of plantation landscapes, Adams reveals connections between seemingly disparate features of modern culture, suggesting that they remain haunted by the force of the unnatural equation of people as property. 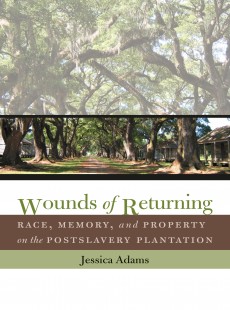 Race, Memory, and Property on the Postslavery Plantation