In the aftermath of the 1910 Mexican Revolution, Mexican and U.S. political leaders, business executives, and ordinary citizens shaped modern Mexico by making industrial capitalism the key to upward mobility into the middle class, material prosperity, and a new form of democracy--consumer democracy. Julio Moreno describes how Mexico's industrial capitalism between 1920 and 1950 shaped the country's national identity, contributed to Mexico's emergence as a modern nation-state, and transformed U.S.-Mexican relations.

According to Moreno, government programs and incentives were central to legitimizing the postrevolutionary government as well as encouraging commercial growth. Moreover, Mexican nationalism and revolutionary rhetoric gave Mexicans the leverage to set the terms for U.S. businesses and diplomats anxious to court Mexico in the midst of the dual crises of the Great Depression and World War II. Diplomats like Nelson Rockefeller and corporations like Sears Roebuck achieved success by embracing Mexican culture in their marketing and diplomatic pitches, while those who disregarded Mexican traditions were slow to earn profits.

Moreno also reveals how the rapid growth of industrial capitalism, urban economic displacement, and unease caused by World War II and its aftermath unleashed feelings of spiritual and moral decay among Mexicans that led to an antimodernist backlash by the end of the 1940s. 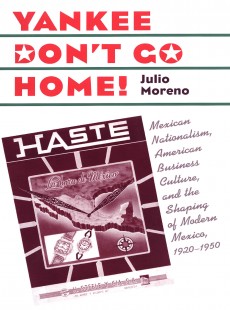