In the summer of 1883 Belgian travel writer Jules Leclercq spent ten days on horseback in Yellowstone, the world's first national park, exploring myriad natural wonders: astonishing geysers, majestic waterfalls, the vast lake, and the breathtaking canyon. He also recorded the considerable human activity, including the rampant vandalism. Leclercq's account of his travels is itself a small marvel blending natural history, firsthand impressions, scientific lore, and anecdote. Along with his observations on the park's long-rumored fountains of boiling water and mountains of glass, Leclercq describes camping near geysers, washing clothes in a bubbling hot spring, and meeting such diverse characters as local guides and tourists from the United States and Europe. Notables including former president Ulysses S. Grant and then-president Chester A. Arthur were also in the park that summer to inaugurate the newly completed leg of the Northern Pacific Railroad.A sensation in Europe, the book was never published in English. This deft translation at long last makes available to English-speaking readers a masterpiece of western American travel writing that is a fascinating historical document in its own right. 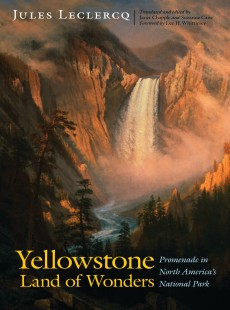