A farmer perishing under a fallen tractor makes a last stab at philosophizing: "There was nothing dead that was ever beautiful." It is a sentiment belied not only by the strange beauty in his story but also in the rough lives and deaths, small and large, that fill these haunting tales. Pulp-fiction grim and gritty but with the rhythm and resonance of classic folklore, these stories take place in a world of shadowy figures and childhood fears, in a countryside peopled by witches and skinflints, by men and women mercilessly unforgiving of one another's trespasses, and in nights prowled by wolves and scrutinized by an "agonized and lamenting" moon. Ervin D. Krause's characters pontificate in saloons, condemning the morals of others as they slowly get sloshed; they have affairs in old cars on winter nights; they traffic in gossip, terrorize their neighbors, steal, hunt, and spy.   This collection includes award-winning stories like "The Snake" and "The Quick and the Dead" as well as the previously unpublished "Anniversary," which stirred a national controversy when it was censored by the University of Nebraska and barred from appearing in Prairie Schooner. Krause's portrayal of the matter-of-fact cruelty and hopeful fragility of humanity is a critical addition to the canon of twentieth-century American literature. Learn more about Ervin D. Krause. 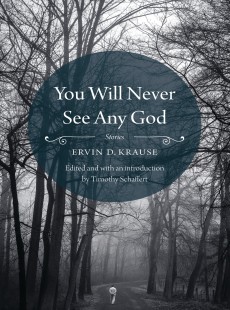 You Will Never See Any God