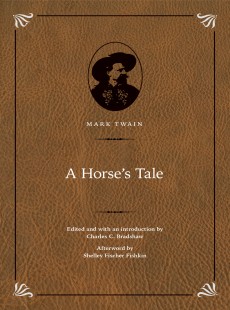 At the turn of the twentieth century Minnie Maddern Fiske, a New York actress, socialite, and animal rights activist, wrote to Mark Twain with an unusual request: for Twain to write about the evils of bullfighting equal to that of his anti-vivisectionist story A Dog's Tale. Twain responded with A Horse's Tale, a comic animal tale that doubled as a frontier adventure and political diatribe.A Horse's Tale concerns Soldier Boy, Buffalo Bill Cody's favorite horse, as the protagonist and sometime narrator at a fictional frontier outpost with the U.S. Seventh Cavalry. When the general's orphaned niece arrives, Buffalo Bill takes her under his wing and ultimately lends her Soldier Boy so that they may seek adventure together. Twain uses the friendship between the girl and the horse as the basis for his eventual indictment of the barbarism of Spanish bullfighting. Twain's novella is unusual for its complex tone—combining a comic children's story and a dark portrait of animal cruelty. Including the themes of transatlantic relations and frontier culture, Twain offers a fresh look into the world of Buffalo Bill Cody from the perspective of one of America's most beloved authors. First published in 1906 in Harper's Monthly and as a single volume the following year, A Horse's Tale never again appeared in print except in anthologies of Twain's work. This edition includes the full text of Twain's original story, an introduction that situates the work in historical and biographical context, thorough annotations, and the addition of significant archival material related to Twain, Cody, and Fiske.

Mark Twain (1835–1910) was an American author and humorist. He wrote The Adventures of Tom Sawyer and its sequel, Adventures of Huckleberry Finn. Charles C. Bradshaw is an associate professor of English at Brigham Young University–Hawaii.