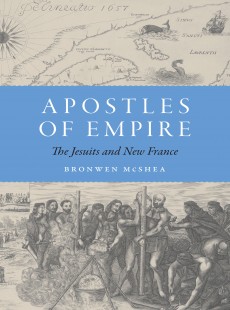 The Jesuits and New France

Apostles of Empire is a revisionist history of the French Jesuit mission to indigenous North Americans in the seventeenth and eighteenth centuries, offering a comprehensive view of a transatlantic enterprise in which secular concerns were integral. Between 1611 and 1764, 320 Jesuits were sent from France to North America to serve as missionaries. Most labored in colonial New France, a vast territory comprising eastern Canada and the Great Lakes region that was inhabited by diverse Native American populations. Although committed to spreading Catholic doctrines and rituals and adapting them to diverse indigenous cultures, these missionaries also devoted significant energy to more-worldly concerns, particularly the transatlantic expansion of the absolutist-era Bourbon state and the importation of the culture of elite, urban French society. In Apostles of Empire Bronwen McShea accounts for these secular dimensions of the mission's history through candid portraits of Jesuits engaged in a range of secular activities. We see them not only preaching and catechizing in terms that borrowed from indigenous idioms but also cultivating trade and military partnerships between the French and various Indian tribes. Apostles of Empire contributes to ongoing research on the Jesuits, New France, and Atlantic World encounters, as well as on early modern French society, print culture, Catholicism, and imperialism. McShea shows how the Jesuits' robust conceptions of secular spheres of Christian action informed their efforts from both sides of the Atlantic to build up a French and Catholic empire in North America through significant indigenous cooperation.

Bronwen McShea is a 2018–19 fellow of the James Madison Program at Princeton University and has taught history at the University of Nebraska Omaha and Columbia University.

"A boldly revisionist account of the Jesuit mission in New France. . . . This impressively researched, well-structured, and superbly written narrative makes important contributions to our knowledge of early modern Jesuits, Catholicism, France, French colonialism, and the Atlantic World, while simultaneously casting modern French colonialism in a new light."—Brad S. Gregory, author of The Unintended Reformation: How a Religious Revolution Secularized Society

"Thanks to McShea's meticulous research, these missionaries now appear less as ascetic martyrs devoted to saving Native American souls and more as worldly imperialists committed to spreading French civilization. In tracing the 'civilizing mission' back to the seventeenth century, this study upends current assumptions about the Enlightenment origins of modern French imperialism."—Charles Walton, author of Policing Public Opinion in the French Revolution