In 1948, journalist Ray Sprigle traded his whiteness to live as a black man for four weeks. A little over a decade later, John Howard Griffin famously "became" black as well, traveling the American South in search of a certain kind of racial understanding. Contemporary history is littered with the surprisingly complex stories of white people passing as black, and here Alisha Gaines constructs a unique genealogy of "empathetic racial impersonation--white liberals walking in the fantasy of black skin under the alibi of cross-racial empathy. At the end of their experiments in "blackness," Gaines argues, these debatably well-meaning white impersonators arrived at little more than false consciousness.

Complicating the histories of black-to-white passing and blackface minstrelsy, Gaines uses an interdisciplinary approach rooted in literary studies, race theory, and cultural studies to reveal these sometimes maddening, and often absurd, experiments of racial impersonation. By examining this history of modern racial impersonation, Gaines shows that there was, and still is, a faulty cultural logic that places enormous faith in the idea that empathy is all that white Americans need to make a significant difference in how to racially navigate our society. 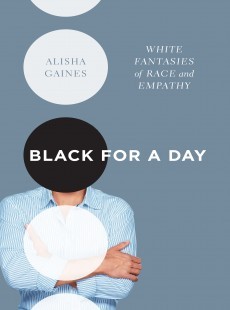 Black for a Day

White Fantasies of Race and Empathy