In this highly original study, Gregory Downs argues that the most American of wars, the Civil War, created a seemingly un-American popular politics, rooted not in independence but in voluntary claims of dependence. Through an examination of the pleas and petitions of ordinary North Carolinians, Declarations of Dependence contends that the Civil War redirected, not destroyed, claims of dependence by exposing North Carolinians to the expansive but unsystematic power of Union and Confederate governments, and by loosening the legal ties that bound them to husbands, fathers, and masters.

Faced with anarchy during the long reconstruction of government authority, people turned fervently to the government for protection and sustenance, pleading in fantastic, intimate ways for attention. This personalistic, or what Downs calls patronal, politics allowed for appeals from subordinate groups like freed blacks and poor whites, and also bound people emotionally to newly expanding postwar states. Downs's argument rewrites the history of the relationship between Americans and their governments, showing the deep roots of dependence, the complex impact of the Civil War upon popular politics, and the powerful role of Progressivism and segregation in submerging a politics of dependence that--in new form--rose again in the New Deal and persists today. 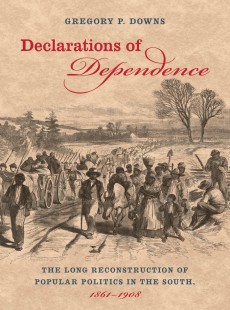 The Long Reconstruction of Popular Politics in the South, 1861-1908