This work explores a neglected aspect of the forced migration of African laborers to the Americas. Hundreds of thousands of captive Africans continued their journeys after the Middle Passage across the Atlantic. Colonial merchants purchased and then transshipped many of these captives to other colonies for resale. Not only did this trade increase death rates and the social and cultural isolation of Africans; it also fed the expansion of British slavery and trafficking of captives to foreign empires, contributing to Britain's preeminence in the transatlantic slave trade by the mid-eighteenth century. The pursuit of profits from exploiting enslaved people as commodities facilitated exchanges across borders, loosening mercantile restrictions and expanding capitalist networks.

Drawing on a database of over seven thousand intercolonial slave trading voyages compiled from port records, newspapers, and merchant accounts, O'Malley identifies and quantifies the major routes of this intercolonial slave trade. He argues that such voyages were a crucial component in the development of slavery in the Caribbean and North America and that trade in the unfree led to experimentation with free trade between empires. 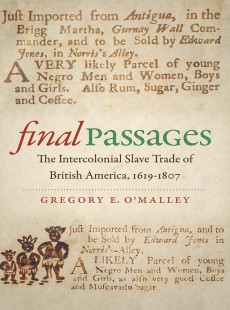