Historian Isaac Campos combines wide-ranging archival research with the latest scholarship on the social and cultural dimensions of drug-related behavior in this telling of marijuana's remarkable history in Mexico. Introduced in the sixteenth century by the Spanish, cannabis came to Mexico as an industrial fiber and symbol of European empire. But, Campos demonstrates, as it gradually spread to indigenous pharmacopoeias, then prisons and soldiers' barracks, it took on both a Mexican name--marijuana--and identity as a quintessentially "Mexican" drug. A century ago, Mexicans believed that marijuana could instantly trigger madness and violence in its users, and the drug was outlawed nationwide in 1920.

Home Grown thus traces the deep roots of the antidrug ideology and prohibitionist policies that anchor the drug-war violence that engulfs Mexico today. Campos also counters the standard narrative of modern drug wars, which casts global drug prohibition as a sort of informal American cultural colonization. Instead, he argues, Mexican ideas were the foundation for notions of "reefer madness" in the United States. This book is an indispensable guide for anyone who hopes to understand the deep and complex origins of marijuana's controversial place in North American history. 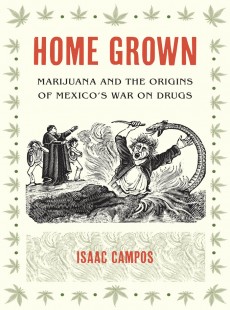 Marijuana and the Origins of Mexico's War on Drugs